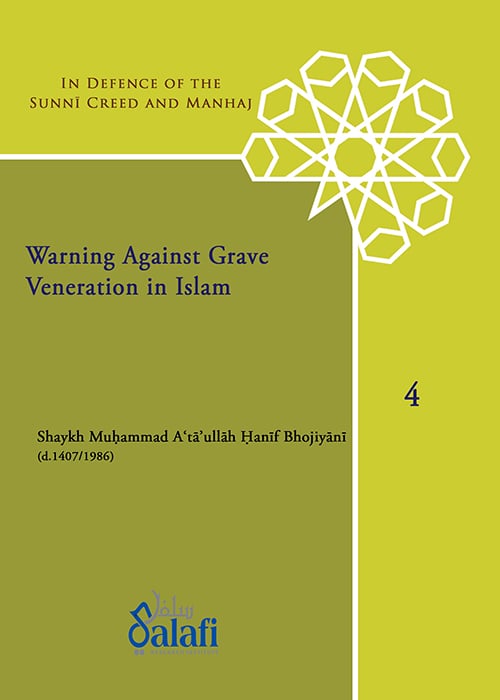 SERIES: IN DEFENCE OF THE SUNNI CREED AND MANHAJ - No.4

The Hour will not be established until a group of my ummah attribute and associate themselves with polytheists (mushriks) and until groups from my ummah worship idols. (Abū Dāwūd, al-Sunan, no. 4252; Mishkāt al-Maṣābīḥ, no.5406, and it was graded Ṣaḥīḥ by Shaykh al-Albānī.)

The foreword explains the importance of this treatise and how the Muslim Ummah needs to reflect on their actions while appraising them with the Qurʾān and Ḥadīth. The belief and creed of the Sunnī must be taken from divine sources, and this is why Shaykh al-Islam Ibn Taymiyyah (d.728/1328) said:

ʿAqīdah does not belong to me or to the one who is older than me, rather ʿaqīdah is taken from Allāh , his Messenger  and what the Imāms of the Salaf of this Ummah were unanimously agreed upon i.e. had ijmãʾ on. So ʿaqīdah is taken from the Book of Allāh and from the Āḥadīth of al-Bukhārī, Muslim and others, and also from well known āḥadīth and from the statements that have been established from the Salaf of this ummah. (Majmūʿa al-Fatāwa, 3:203)

This small treatise of the late Pakistani multi disciplinary scholar, Shaykh Muḥammad ʿAṭāʾAllāh Ḥanīf Bhojiyānī (d.1407/1987) was first published as a two-part series in the monthly journal, Raḥīq, in the November and December of 1956C.E. It was then reprinted in book form in 1985C.E. The Shaykh also wrote a number of small treatise on topics associated with the subject of this book, for example: ‘A Critical Warning Against the Commemorative Festivals on Graves’ and ‘An Analysis on Destroying Domes Over Graves and the Reform Movement of Tawḥīd in Ḥijāz’ and ‘Slanderous Allegations Against Shaykh al-Islam Ibn Taymiyyah About Visiting the Prophets  Grave’ and many others.

This particular treatise, despite its small size, had a huge impact on the masses when it was first published. The precision, arguments and power of deduction from the statements of the respected scholars, were so convincing that many people changed their beliefs. This was difficult for certain quarters to accept and they, the Barelwī’s and Ṣūfī’s lodged a complaint with the authorities in Pakistan and had it banned. Its publication today symbolises a defiant act of propagating the divine call of Tawḥīd, irrespective of the pitiable ban, and even until today, it is illegal and forbidden to publish it in Pakistan. With the ban of this treatise, the immense benefit and clarification contained therein, as well as the words of Shaykh Ozayr Shams during my discussion with him, that this treatise is exceptionally beneficial, I decided to publish it in book form, as opposed to presenting an online rendition. Likewise, we have explicit permission from the Shaykh’s family, namely Shaykh Aḥmad Shākir, to publish this book as well as other works of Shaykh Muḥammad ʿAṭāʾAllāh Ḥanīf Bhojiyānī.

This is the first treatise of the Shaykh in English. and included with it, is a very brief biography of the Shaykh. We pray that people, In-Shāʾ-Allāh, while reading this treatise with the evidences, understand the correct view regarding this serious matter and thus follow the ʿaqīdah and manhaj of the pious ancestors, thereby seeking the pleasure and forgiveness of Allāh, The Exalted.