The Foundations of Islam - Shaykh Muhammad b. Abdul Wahhab (d.1206) 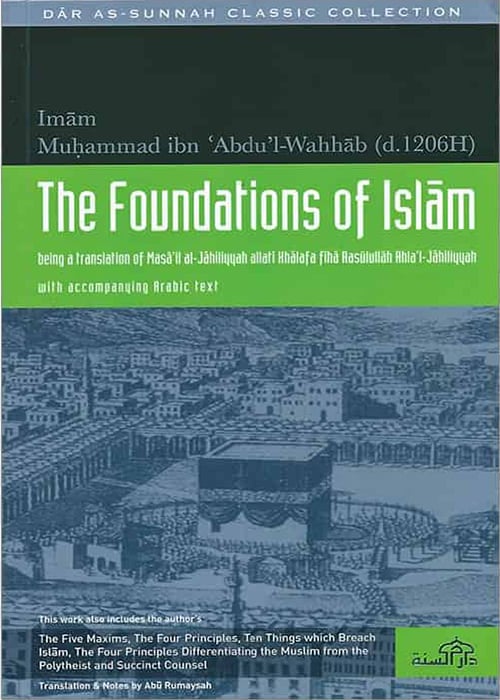 This work also includes the author’s:

This is an important collection of writings by Shaykh Muhammad ibn `Abdu’l- Wahhab all dealing with essential components of Muslim belief and identity. The book is an invaluable addition to the Muslim bookshelf.

The first is the outstanding work, Masa’il al-Jahiliyyah in which the author lists 128 characteristics, current amongst the people of the Time of Ignorance, which were opposed by the Messenger of Allah , all of them essential learning for any Muslim. The goal is to purge contemporary Muslim society from any such traits that may linger on and to direct them back to the guidance of the

Messenger of Allah in its pristine purity. The treatise is written in simple, accessible language and is marked by a heavy reliance on Qur’anic verses which lends it to easy reading. Relevant as it was then, it remains relevant today and its importance cannot be underestimated. The Arabic text of this work has also been included.

The second, Nawaqid al-Islam is an article listing ten things which breach a person’s profession of Islam, incorporated here so that the Muslim can do his utmost to avoid them.

The third is the monograph, al-Qawa`id al-Khams in which the author explains five fundamental components of the Messenger’s call.

The fourth is the famous treatise, al-Qawa`id al-Arba` in which the author expounds on the reality of Tawhid and shirk through explaining four principles which will save a person from the trap of polytheism in all of its many forms. The author wrote various versions of this treatise in his life and three such versions have been incorporated here.

The last is a counsel or advice given by the author directed to all Muslims.