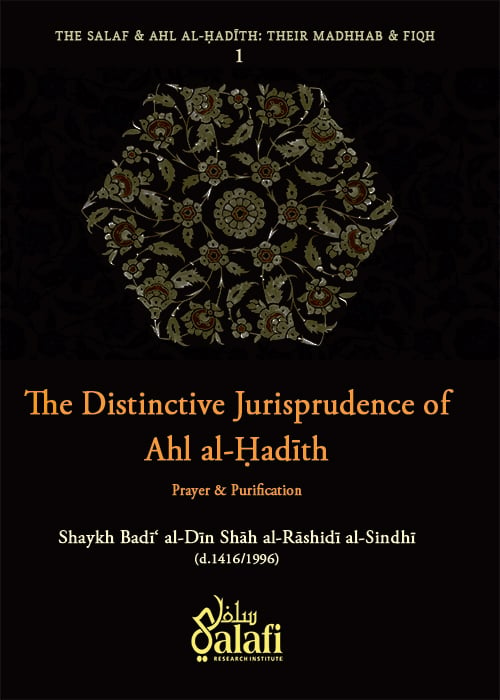 SERIES: THE SALAF AND AHL AL-ḤADĪTH: THEIR MADHHAB AND FIQH - No.1

This book, The Distinctive Jurisprudence of the Ahl al-Ḥaḍīth clarifies issues of contention between the Ahl al-Ḥadīth and the people of taqlīd i.e. the Ḥanafī Madhhabists. For many years the Aḥnāf have published books in English and have put forth their evidences for these contentious issues of fiqh and at the same time repudiated the view of Ahl al-Ḥadīth.

These issues are not new to Ahl al-Sunnah and Shaykh Badīʿ al-Dīn Shāh al-Rāshidī al-Sindhī addressed them around Seventy-Five (75) years ago when he was in his prime; just Twenty (20) years old, when he delivered a lecture in 1945. His teacher and the fervent defender of the Madhhab of Ahl a-Ḥadīth, Shaykh ThanāʾAllāh Amritsarī (d.1367/1948) said about him while introducing him to the conference:

Today the keynote speaker of this conference is a young scholar hailing from Sindh who is a specialist in Asmāʾ al-Rijāl.

The lecture was subsequently transcribed and published a number of times. I used different editions of the books as well as the nominal referencing contained therein. I added further extensive references and quotes from other sources as well cross references from Shaykh Badī’s other works, however brevity was adopted in order to minimise the footnotes. I similarly referenced the very brief introduction of Shaykh ʿAbd Allāh Nāṣir Reḥmānī. I have also, by way of information and for biographical reasons, cited some of Shaykh Badīʿ al-Dīn’s other works, to inform the reader of the Shaykh’s extensive writings and research.

Lastly, I have added some brief snippets of the Shaykhs life, so that the reader learns more about this remarkable Salafī Ḥadīth Master. We pray that In-Shāʾ-Allāh, people benefit from this short but succinct work and that it serves as a basic reference point for contentious issues of fiqh, which are frequently reiterated by the adherents of the Ḥanafī Madhhab.

Translator’s Introduction
The Author’s Biography
Foreword – Shaykh ʿAbd Allāh Nāṣir Reḥmānī
Author’s Introduction
The Time for Ẓuhr Prayer
The Nullification of Wuḍhū by Touching the Private Part
The Nullification of Wuḍhū by Eating Camel Meat
Does Vomiting, Bleeding and Laughing Nullify Wuḍhū?
Reciting al-Fātiḥah Behind the Imām
The First Ḥadīth - Whoever does not recite al-Fātiḥah there is no prayer for him
The Second Ḥadīth - Whoever prayed and he did not recite the Umm al-Qurʾān
The Third Ḥadīth - His recitation became difficult for him
The Fourth Ḥadīth - There is no prayer for the one who does not recite the Fātiḥah
The Fifth Ḥadīth - Whoever prays behind the Imām should recite the al-Fātiḥah
Ḥanafī Evidences and Answers to them
The First Evidence - “So, when the Qurʾān is recited...”
The Second Evidence - ‘Whoever has an Imām, then his recitation
The Third Evidence - When the Imām recites then listen
The Fourth Evidence - The people stopped reciting
The Fifth Evidence - The Messenger of Allāh Sallalahu Alayhi wasallam praying during his last days
Placing the Hands on the Chest
Saying Amīn Loudly
Raising the Hands
Tawarruk
The Sitting of Rest (Jalsah Istarāhah)
Witr
The Number of Rakʿahs for Tarāwīḥ