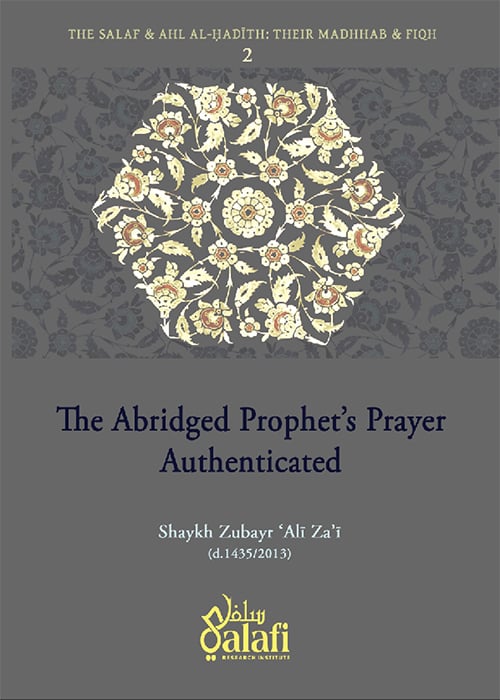 SERIES: THE SALAF AND AHL AL-ḤADĪTH: THEIR MADHHAB AND FIQH - No.2

The prayer is an extremely important pillar of Islam, and its obligation is emphatically established in the Qurʾān and mutawātir āḥadīth. Muslims are unanimously agreed, i.e. in terms of Islamic terminology, they have ijmāʾ on it being compulsory. When the Messenger of Allāh sent the distinguished Companion Muʿadh bin Jabal to Yemen he instructed him:

‘Invite the people to testify that none has the right to be worshipped except Allāh and I am Allāh's Messenger , and if they obey you, then teach them that Allāh has enjoined on them five prayers in every day and night…’

In the words of the leading Albanian Ḥadīth Master of our time, Shaykh Muḥammad Nāṣir al-Dīn al-Albānī (d.1420/1999)  expressed great insight about the importance of the prayer and the manner in which it is performed, when he said:

When I finished reading the book of prayer in al-Targhīb Waʾl-Tarhīb by al-Ḥāfiẓ al-Mundhirī and teaching it to our brothers, four years ago, it became clear to us all the important position of the Prayer in Islam; and the reward, grace and respect awaiting those who establish and perform it well; and that all this varies, depending on its closeness to the Prophet's prayer . This is what he indicated in his saying, ‘Verily the slave prays a prayer of which nothing is written down for him except a tenth, ninth, eighth, seventh, sixth, fifth, quarter, third or half of it.’ Therefore, I reminded the brothers that it is not possible for us to perform prayer as it should be performed, or even approach that, unless we know the detailed description of the Prophet's prayer , including its essentials, manners, forms, supplications (duʿāʾs) and remembrances (adhkār), and then we make an effort to put that knowledge into practice carefully, for then we could hope that our prayers would restrain us from shameful and unjust deeds, and that the reward and blessings mentioned in the narrations would be written down for us.

However, detailed familiarity with all these aspects of prayer is unlikely to be achieved by most people nowadays, even many scholars, because of their limiting themselves to a particular Madhhab. But, as anyone concerned with assisting in compiling and studying the purified Sunnah knows, in every Madhhab there are sunnahs which are not found in other Madhhabs; moreover, in every Madhhab there are sayings and actions which cannot be authentically traced back to the Prophet. (Shaykh Muḥammad Nāṣir al-Dīn al-Albāni, Ṣifah Ṣalāh al-Nabī, 36)

A number of books have been authored on the prayer of the Prophet in the English language. Most of these books have interpreted the Prophets prayer according to the ḥanafī Madhhab, meaning; they interpret the Prophetic āḥadīth according to the ḥanafī Madhhab based on taqlīd. There are, except a handful of books which elucidate and clarify how the Messenger of Allāh  prayed according to the authentic āḥadīth. This book, which also covers topics connected to the prayer, predominantly substantiates the Prophet’s prayer through authentic evidences, and the author, Shaykh Zubayr ʿAlī Zaʾī (d.1435/2013) primarily relied and utilised textual proofs from the two most authentic books of ḥadith ever authored, namely the Ṣaḥīḥ’s of Imām al-Bukhārī (d.256/870) and Imām Muslim (d.261/875).