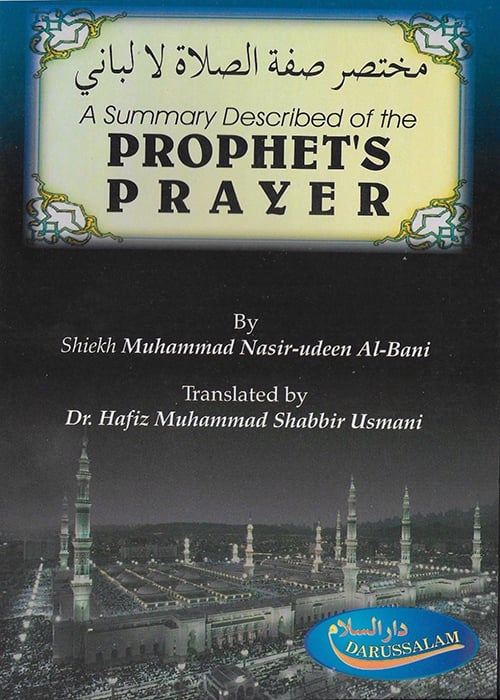 Shaikh al-Albani, may Allah have mercy upon him, said, “It was suggested to me that I should undertake an abridgement of my book, “Description of the Prophet’s Prayer from the Takbir to the Taslim as if you were seeing it” and that I should shorten it and rephrase it for it to be more accessible to the common people.

So I found this to be a favourable suggestion, and it agreed with what I myself had felt for a long time. I had also frequently heard such advice from brothers and friends. So this encouraged me to allocate to it a small part of my time which is crowded with knowledge-related work and research. So I hastened, as far as my ability and efforts allowed, to carry out the suggestion, whilst asking the Guardian-Lord, the One free of all imperfections and the Most High, that He should make it an action done purely and sincerely for His Face, and that He should cause it to be of benefit to my brother Muslims.

In it I quoted some extra points of benefit additional to what is to be found in Sifatus-Salat. These were matters that came to my attention and I thought that it would be appropriate to mention them in the abridgement.

I also gave particular attention to explaining some phrases occurring in some of the narrations and the adhkar (words of remembrance of Allah). I also provided major headings for each section, and also sub-headings for further clarification. Under these I quoted the points under discussion, numbered consecutively. Alongside each issue I quoted the ruling: whether it is a pillar (rukn) or an obligation (wajib). As for those matters about which I remained silent and did not mention a ruling, then they are from the Sunnah, and some of them carry the possibility of being declared obligatory. However stating one or the other with certainty would conflict with what is befitting from scholarly research …”

Preface
Facing towards Qiblah
Mistakenly, offering the prayer facing other than Qiblah
Standing for the prayer-Qiyaam
Praying on a ship or plane
Combining the both positions, sitting and standing, while praying
Praying with shoes
Praying on the Minber-pulpit
Praying near to Sutrah
(to place something in front while praying)
The height of the Sutrah
Offering prayer while facing the tombs or grave is prohibited Prohibition of passing in front of a praying person, even in the Mosque of Makkah
Preventing someone from passing in front of himself while praying, even in the Holy Mosque of Makkah
Stepping forward to prevent a passing person in front of a praying person
Things that cut off the prayer
Saying the intention in words
Takbeer Tahreemah proclaiming Allah-u-Akbar
Lifting the hands and the authentic way
Placing the hands and the correct way
Where to put the hands
The opening supplication
Recitation